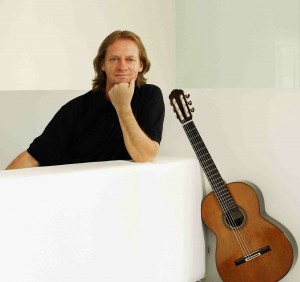 Grammy award-winning guitarist David Russell is world renowned for his superb musicianship and inspired artistry, having earned the highest praise from audiences and critics alike.

In recognition of his international career, he was named a Fellow of The Royal Academy of Music, London, in 1997. Russell spends his time touring the world, appearing regularly at prestigious concert halls in cities including New York, London, Tokyo, Los Angeles, Madrid, Toronto and Rome.

Twice winner of the Julian Bream Prize during his time at the Royal Academy, Russell later went on to claim first prize at numerous international competitions including the Andrés Segovia Competition; José Ramírez Competition; and Spain’s prestigious Francisco Tárrega Competition.

In 2003 Russell was made an ‘adopted son’ of Es Migjorn, the town in Minorca where he grew up; the town also named a street after him: ‘Avinguda David Russell’. In November of the same year he was awarded the Medal of Honour of the Conservatory of the Balearics, and following his Grammy, Nigrán (the town in Spain where he now resides) presented him with their silver medal. Complementing this list further, in May 2005 the conservatory of Vigo opened a new Auditorium to which they gave the name ‘Auditorio David Russell’.

Since 1995 Russell has had an exclusive recording contract with Telarc International, with whom he has recorded twelve discs to date. Among these recordings is Aire Latino, which won Russell his Grammy in the category of ‘Best Instrumental Soloist in Classical Music’.

About the Author: admin