The next concert will be at Kings Place, London on:

Born in Sassari, Italy, in 1996, Emanuele Addis began his classical guitar training at the age of fourteen at Liceo Musicale in Sassari. He graduated with first class honours from the Conservatorio Antonio Vivaldi, Alessandria and is currently completing a Masters at the Royal Academy of Music, London. He has won prizes at many international competitions, including Second Prize at the London International Guitar Competition in 2021.

Addis has given solo recitals in throughout Europe at venues such as the Palazzina Liberty in Milan, the Senato della Repubblica Italiana in Rome, Italian Institute of Culture in Munich, Germany, Theâtre du Vaudeville in Brussels and Treća beogradska in Belgrade. 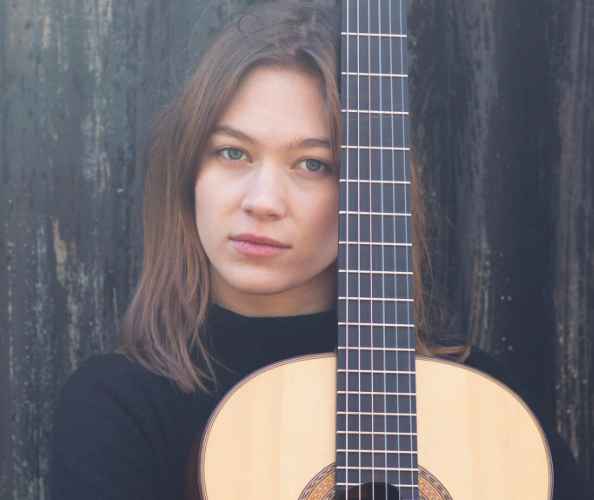 Hope Cramsie is a classical guitarist who recently graduated from Royal College of Music with First Class Honours, where she studied with Gary Ryan and Chris Stell. Her degree also included a semester studying at the Royal Danish Academy of Music in Copenhagen with Jesper Sivebæk as part of the Erasmus Exchange Programme.

Hope was awarded First Prize at Leicester Music Festival’s Advanced Recital Guitar Competition in 2020. She has featured in the International Guitar Foundation’s Young Artist Platform concert series and during the London Guitar Festival at Kings Place. She has also performed at venues such as the National Portrait Gallery, at the How the Light Gets in Literary and Arts Festival, and regularly appears in the RCM’s recital series.

In addition to her solo playing, Hope is also a member of the NYGE Fellowship Ensemble, a guitar ensemble dedicated to developing young talent. As well as being a performer, Hope is also an intern at the creative agency Alternative Classical.

A sophisticated virtuoso, the Havana-born Ahmed Dickinson Cárdenas has performed at prestigious venues including the Royal Albert Hall, Wigmore Hall, Sage Gateshead, Union Chapel, Queen Elizabeth Hall, St Martin-in-the-Fields. Dickinson Cárdenas is widely recognised as an ambassador both for the music and musicians of his native country. Over the last ten years, Ahmed has established a successful career in the UK, while maintaining a performance profile and strong links with Cuba.