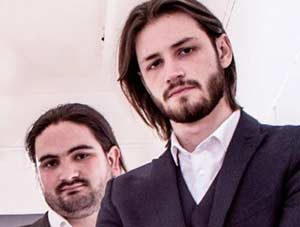 Jiva Housden and George Tarlton formed the Duo in 2012 while studying at the Guildhall School of Music and Drama. The Duo has performed across the UK, including at the Stogumber Music Festival and the London Music Festival and renowned UK venues such as Kings Place, Barbican and most recently Milton Court. Whilst at Guildhall Jiva won the English Song Prize with Tenor Dominick Felix and performed at St. Martins-in-the-Fields. Jiva has recently performed with several orchestras, including performing the mandolin in Mozart’s Don Giovanni alongside the tenor Marcin Bronikowski. George has performed in a variety of settings, including orchestral works, ensembles, chamber works and solo concerts, as well on the BBC Radio 3’s ‘Late Junction’. Their passion for new music and performing the works of contemporary composers, including Stephen Dodgson and Sergio Assad, has attracted composers such as Conrad Stevens and Michael Omer to compose original pieces for the Duo. 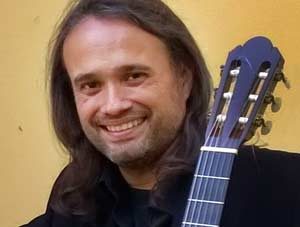 One of the most prominent guitar professors working in Austria, Gabriel Guillén was born in Maracay, Venezuela. He studied in South America with Abel Carlevaro, Leopoldo Igarza, José Gregorio Guanchez and Alberto Espinoza. In 1987 he was prize winner at the Antonio Lauro Competition and was awarded first prize by Rotary International. During this time he took an active part in masterclasses given by Abel Carlevaro, Rafael Benatar, Bartolomé Díaz and Franka Verhagen. In 1988 Gabriel Guillén moved to Vienna, Austria, studying under Prof. Walter Würdinger and in Zurich, Switzerland under Prof. Konrad Ragossnig. Guillén has given critically acclaimed concerts throughout Europe, South America, USA and Japan. Gabriel Guillén received the “Merit Award” from the Austrian Government, The Kery Award, The Artinger Award, the “Amigo de Venezuela“ award from the Venezuela Postiva and the “Honors Award” from Caracas-Avila. He is artistic director of the International Guitarfestival RUST in Austria.