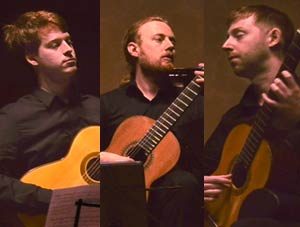 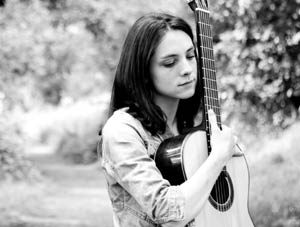 What Guitar Trio is an ensemble made up of award winning guitarists Michael Hughes, Jonathan Parkin and Ioannis Theodoridis. The trio explores an array of repertoire with a focus on contemporary music, performing original works for guitar trio ranging from Anton Diabelli to Per Nørgård and Beat Furrer, as well as many of their own arrangements and premieres of new works.
Since its inception in 2016 the ensemble has performed in some of the most prestigious venues in the country, including Wigmore Hall, the Barbican and The National Portrait Gallery, and for The Greenwich Early Music Festival. The trio gained a place on the International Guitar Foundation’s Young Artist Platform in 2018 and performed at Kings Place for the IGF’s London Guitar Festival. 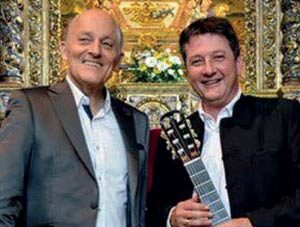 Ground for two
an arrangement of an anonymous English tune

Arnaud Dumond has recorded 15 CDs and he has played in more than 60 countries. He is a prize winner of several international competitions such as those in Paris, Tokyo and the Gaudeamus Competition in Amsterdam. He is the author of many compositions for guitar solo, ensembles, concerti and choir such as his Mass in terra pax and Nativity Requie.
The online magazine guitaremag.com wrote about him in 2018: Arnaud Dumond is one of the most exciting musical personalities on the French scene.
The Dumond-Bernard Guitar Duo was specifically founded to record the work for two guitars by Arnaud Dumond. The duo has played worldwide, and have most recently toured in France, Spain, Portugal and Italy.