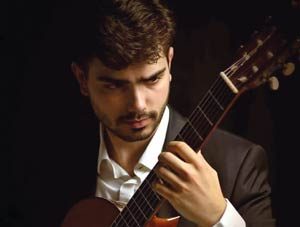 Dimitris Soukaras (1995) is a Greek guitarist, chamber musician and composer living in London where he is a Masters student at the Royal Academy of Music studying with Michael Lewin and Stephen Goss. Dimitris has received distinction in 12 international competitions, including 1st prize at Mottola International Guitar Competition 2018 and also winning the Academy of Athens Music Scholarship 2018. Dimitris is included in the EuroStrings project, appearing at some of the 17 member guitar festivals in 2019. He is recording his first CD which will be published by dotGuitar. He has performed in many festivals in Greece, including a solo recital at the Megaron Athens Concert Hall and recorded for the national radio ERT. Dimitris completed his Bachelor of Music with the highest marks and honours at the Ionian University Department of Music Studies under Costas Cotsiolis and Kostantinos Vougiouka. He was the first student of the University to complete his studies in three years instead of the standard five. 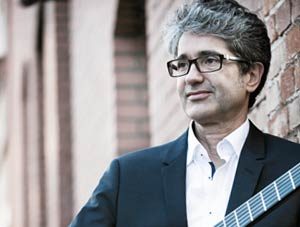 Join master guitarist Stefan Grasse for a thrilling evening of vivid music from Brazil, Cuba, Argentina, France and Spain. Be entertained by bossa nova from the sandy beaches of Copacabana and Ipanema, passionate tangos from the bars and brothels of Buenos Aires, the valse musettes of Parisian cafés and red hot Flamenco sounds from Andalusia. Much of the music tonight comes from Stefan’s highly acclaimed new album ‘Entre cielo y tierra’ (between sky and earth) which offers colourful new arrangements of music by A.C. Jobim, Gerardo Nuñez and his own. ‘Entre cielo y tierra’ is performed by a master virtuoso, one of the most exciting European guitarists to appear on the concert platform in recent years. A blend of yearning, zest for life and pleasure!