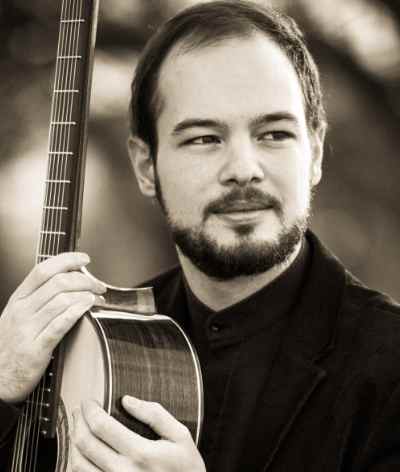 Flavio Nati graduated with honours from the Conservatorio Santa Cecilia in his hometown, Rome, in 2012, where he studied with Arturo Tallini. Under the guidance of Carlo Marchione, he gained his Masters in classical guitar performance at the Conservatorium Maastricht, the Netherlands. He has participated in masterclasses with Giuliano Balestra, Adriano del Sal, Paolo Pegoraro, Judicaël Perroy and Zoran Dukić, and also with Oscar Ghiglia at the Accademia Musicale Chigiana in Siena. He recently received a Masters in the Interpretation of Contemporary Music from the Conservatorio Santa Cecilia and in Guitar Performance from Conservatorio di Musica Arrigo Boito in Parma.

He regularly gives concerts in Italy and Europe and has recently performed a series of recitals in Japan and Korea, and appeared on television and in radio broadcasts in Amsterdam and for Cremona 1 TV. Since 2013, Flavio has been a member of the guitar octet Supernova, an ensemble under the direction of Arturo Tallini, formed by eight young Italian prizewinners. He has won prizes at a number of competitions, such as the Tokyo International Guitar Competition; he won First Prize at the International Guitar Competition ‘Ferdinando Carulli’ in the chamber music section. In 2018, he won the Respighi Prize offering him the opportunity to play as a soloist with the New York Chamber Orchestra in 2019/2020 season, in the Weill Recital Hall at Carnegie Hall. 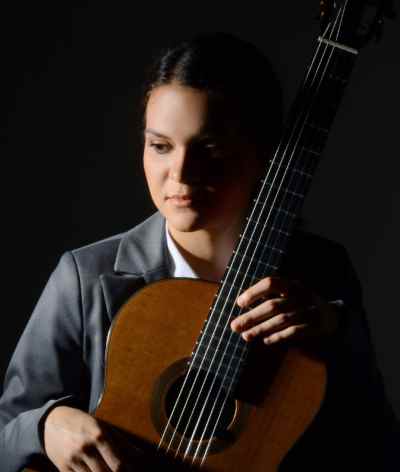 Ema Kapor was born in 1998 in Belgrade, Serbia, where she studied at both the primary music school and music high school “Stanković’ with Boris Đujić. Afterwards, she completed two years of studies at the Koblenz International Guitar Academy, Germany, with Hubert Käppel. She is continuing to study with Hubert Käppel, at the Cologne University of Music and Dance.

She has given solo concerts in Germany, Greece and Serbia and also performed in France, Poland, Spain and Austria. As a soloist accompanied by an orchestra, she has performed Joaquin Rodrigo’s Fantasia para un Gentilhombre in Timisoara, Romania and at the Guitar Art Festival 2019 in Belgrade. Ema Kapor is promoted by the association Yehudi Menuhin Live Music Now – Cologne, which organises concerts in social and medical institutions, for people of all ages who otherwise would not be able to experience public concerts live. In 2019, winning the first prize at the Tallinn Guitar Festival, she became part of the EuroStrings Artists Exchange Programme, earning the opportunity to tour festivals of the EuroStrings Platform. 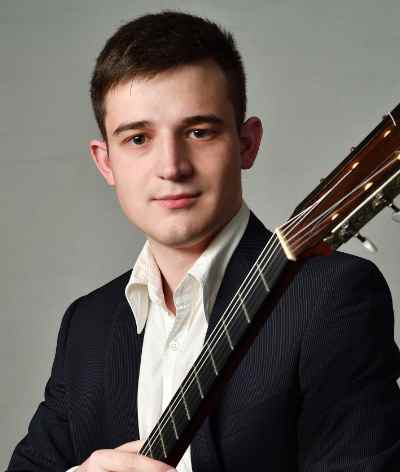 Zsombor Sidoo, who was born in Budapest in 1997, received his early musical training from József Eötvös at the Franz Liszt Academy for Music in Budapest. From 2013, he studied with Paolo Pegoraro at the Universität für Musik und darstellende Kunst in Graz. In 2016, he received a scholarship from the city of Graz for the best music student studying in Graz. In 2019, he graduated with the highest marks. Currently, he is pursuing his Masters and is already being recognised as a unique talent with great sensibility for diverse musical styles. He has also taken lessons in musical composition with Beat Furrer.

Zsombor Sidoo has won numerous competitions, such as First Prize at: the Zagreb Guitar Festival, the 15th Concorso Internazionale di Chitarra Classica ‘Enrico Mercatali’ in Gorizia, Italy, the International Guitar Competition ‘Ida Presti’ in Samobor and at the 10th Oberhausen Guitar Competition in Germany. He regularly gives concerts in Europe at prestigious venues such as the Ehrbar Saal in Vienna, the Mozarthaus in Augsburg and the Fricsay Hall in Szeged. His debut CD with three sonatas by Johann Sebastian Bach, Manuel María Ponce and Hans Werner Henze was released in October 2019. 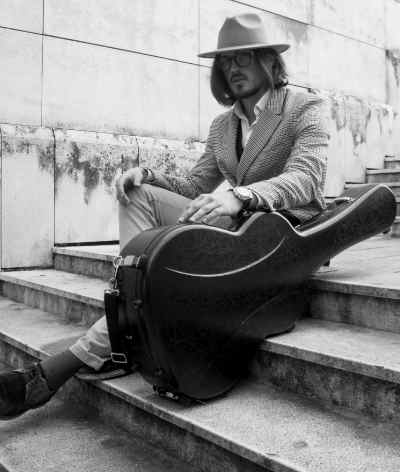 Silvio Bilić started playing guitar at the age of eight in the small town of Omiš with Neno Munitić. In 2017, he enrolled at the Arts Academy of Split where he studied with Maroje Brčić. He has been active in guitar competitions since 2008. He has won 20 first prizes as a soloist and 12 first prizes as a member of chamber ensembles, at many national and international competitions such as the International Competition for Young Guitarists ‘Andrés Segovia’ in Velbert, Germany, the Montenegro Guitar Competition, the Concorso Internazionale di Chitarra Classica ‘Enrico Mercatali’ in Gorizia, Italy, and the Omiš Guitar Fest and Poreč Fest in Croatia. In 2014, 2017 and 2019, he won the award ‘Oscar of Knowledge’ from the Croatian Ministry of Science, Education and Sports for winning the First Prize at the National Competition both as a soloist and as a member of chamber ensembles. He has participated in masterclasses with Hubert Käppel, Carlo Marchione, Aniello Desiderio, Pavel Steidl, Łukasz Kuropaczewski, Goran Krivokapić and Darko Petrinjak. He often works in collaboration with well-known Croatian actors at various cultural events. 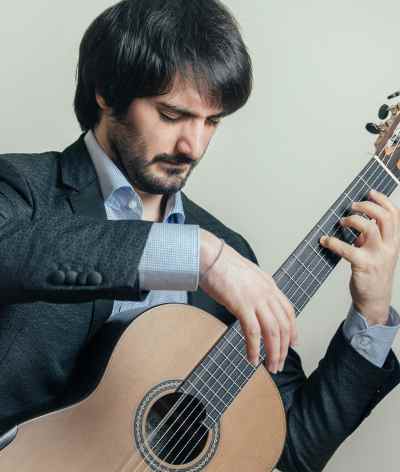 Carlo Curatolo began his studies with Pino Forresu, Francesco Taranto and Stefano Palamidessi. In 2010, he graduated from the Conservatory of Taranto and, in 2016, he gained a Masters in Physics at the Sapienza University of Rome. He continued his musical studies at the Segovia Guitar Academy in Pordenone with Paolo Pegoraro and Adriano del Sal, and at the Accademia Musicale Chigiana in Siena with Oscar Ghiglia. He is currently enrolled on a postgraduate course in music performance and interpretation at the Conservatorio di Musica Arrigo Boito in Parma. He has also participated in masterclasses with Carlo Domeniconi, Judicaël Perroy, Jorge Cardoso, Leo Brouwer and Carlo Marchione.

Since 2006 he has been performing both as a soloist and in ensemble in Italy, Austria, Portugal, Slovakia and Hungary. He combines his performing career with busy teaching practice in Rome. 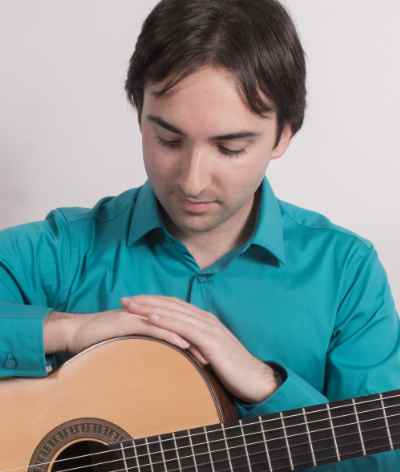 He has given concerts and masterclasses in a large part of the Spanish geography, Germany, the United States, Austria, Chile, Argentina or Andorra, and has collaborated with orchestras such as the Tenerife Symphony Orchestra or OSLP. In 201,8 he released his first CD, Lazos sobre el Atlántico, produced
by JSM Guitar Records, in which he links his classical education with his Latin American music passion. He is a member of Canary Guitar Quartet, with which he has been internationally awarded, in addition to having released their first recording called, 21.

His debut as a soloist was in Palau de la Música Catalana, Barcelona in October 2019.  In April 2020, he performed with the National Radio and Television Orchestra of Spain (ORTVE) at the Teatro Monumental. 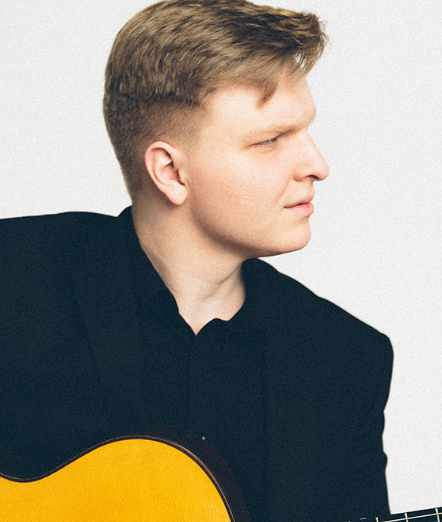 Acclaimed by Classical Guitar Magazine as a ‘spectacular’ musician and his interpretations as ‘truly breathtaking’, Mateusz Kowalski is emerging as a star on the worldwide guitar stage; he performed in the most famous venues worldwide. At the age of 23, he made his debut in Vienna Musikverein and in Shanghai Grand Theatre. In 2019, he performed Concierto de Aranjuez by Joaquín Rodrigo with Warsaw Philharmonic Orchestra. The competitions he has won have had a huge and positive impact on his career. Next to the First Prize and Audience Prize in Antony, France, the most important one has been winning First Prize in the 2nd EuroStrings International Competition, which was held in London, in 2019. This is the first European competition open only to the winners of the EuroStrings international competitions, who were representatives of twelve countries. The prize includes an international tours in Europe, the USA and Asia.

In September 2019, his debut CD album Mateusz Kowalski Classical Guitarist was released by the Polish label CD Accord and distributed by NAXOS. The CD is a set of important pieces for the artist. The repertoire consists of compositions written by Bach, Giuliani, Tárrega, Barrios, Piazzolla, Ponce, Schubert and Assad (première recording). Mateusz was born in Koszalin in 1995. He started learning to play the guitar at the age of 7 and for the next 12 years, he studied with Dariusz Schmidt at the Grażyna Bacewicz State Music School Complex in Koszalin (diploma with honours). Then he graduated from the Fryderyk Chopin University of Music in Warsaw after studies with Ryszard Bałauszko (diploma with honours). He has also mastered his skills during numerous courses and masterclasses conducted by such outstanding musicians as Sérgio Assad, Oscar Ghiglia, Zoran Dukić, Alvaro Pierri, Łukasz Kuropaczewski and Paul O’Dette. Apart from touring, Mateusz is very active as a pedagogue, too. He gave masterclasses during festivals in Szeged (Hungary), Rust (Austria) and Qingdao (China). Since October 2019, he has been teaching at the Frederic Chopin University of Music in Warsaw. Mateusz Kowalski is a scholarship holder of the Marshal of the Zachodniopomorskie Voivodeship, the Mayor of Koszalin and the Minister of Culture and National Heritage – the ‘Young Poland’ programme.